Barry Bonds, Roger Clemens, Alex Rodriguez, and the rest: Are They Truly Hall of Fame Material? 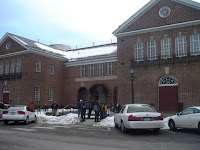 In this Sunday's PARADE section of the Chicago Tribune, the article Do Steroid Users Have a Place in the Hall of Fame? raises a question that holds some heated debate within a variety of sports venues, something it will do for some time to come.
PARADE.com even has an online poll, asked from a different slant than their article title (be careful of this), for individuals to vote one way or the other. And the current statistical trend seems to be weighing heavily on the YES they should NOT be allowed into the Hall of Fame side of the equation.

For me, the answer is simple, and, aside from what some who read my posts might guess, has no direct relevance to the poor character choices these athletes have made and examples they have set.

The key lies with the idea that these athletes have not really accomplished anything at all. Basically, that they have "cheated" their way into the record books and highlight tapes. No different than how a card player might use cards hidden up their sleeve to win at poker.

When an athlete takes a substance that artificially creates ability, something not possible without that substance and something that falsely inflates their true potential, then they become someone other than their true self.

It is really not "them" at all who hit those homeruns, batted in those RBI's, or pitched beyond that 100+ mph mark striking out all those batters, it is someone different than who they really are. On a much grander scale, it is like those basketball players in the Walt Disney film Flubber where they put a rubberized concoction on their shoes and start dunking basketballs from half-court because of how high this material allows them to jump.

Yes, I know that is quite an exaggeration; athletes do still have to practice and train hard in order to gain the benefits from their steroid use. However, that Flubber analogy does help to prove a point. That something unnatural and outside of oneself gave these athletes the ability to perform at levels they simply could not have without that something. Higher performance levels than an equally talented athlete who applied the same commitment to excellence and put forth the same work ethic as the user did.

And no that is not the same as an athlete who has a higher level of inborn natural talent than another and the lesser talented player, who works just as hard, can't catch up. Steroids and PED's (performance-enhancing drugs) simply help to create false talent or potential.

Not that long ago, I had a conversation with Dr. Charles Yesalis of Penn State University regarding his expertise on the consequences of steroid and PED use for the chapter on cheating in my forthcoming book Becoming a True Champion.

For those not familiar with Dr. Yesalis, he is one of the foremost U.S. experts on the nonmedical use and abuse of anabolic-androgenic steroids (AS) and performance-enhancing drugs and dietary supplements. He has testified before the United States Congress on four occasions regarding the use of these substances in elite sports (high-level amateur athletics at the high-school, college and Olympic levels), and by children.

Dr. Yesalis drew up a very interesting analogy for me in our conversation that I think has solid reference to the question posed in that Parade article mentioned above; along with the perspective I am painting here.

He said that if you took two genetically identical twin athletes and one of them used steroids to enhance their training while the other just trained with as much dedication and commitment as they could muster, the non-steroid-using twin would never catch up to the steroid-using twin in ability and performance. In Dr. Yesalis' view, it was just not possible.

I suppose that makes a strong case for why Olympic athletes must forfeit their Olympic honors, medals, and world records for performances that were tainted by steroid use. It is not only an unfair advantage but constitutes a physiological change in body chemistry that says they did not earn those medals or those records at all.

And that brings us back full circle. A Hall of Fame honor is bestowed unto an athlete for outstanding levels of performance and the positive impact that an athlete had in the sport for which they played.

Doesn't allowing someone into a Hall of Fame who used substances like we are describing here (whether deemed legal or not at the time), the kind that help create performances not possible without them, cheapen the honor for those who have earned, or will earn, their way into the Hall of Fame honorably?

How is that any different than, say, letting the individuals who caused the Enron scandal keep the money they "cheated" so many out of when they get out of prison? Would that make sense? They certainly did not earn that money, or did they?

So I guess my answer to the question posed by that PARADE article, Do Steroid Users Have a Place in the Hall of Fame?, is an emphatic NO!!!
Posted by Kirk Mango at 5:10 PM