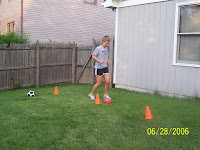 If you are (or were) an athlete, then you know exactly what the title of this post is all about. For many a competitive athlete just the idea of being able to compete is one of the motivating factors behind why they play sports; they just love the exhilaration of the competitive arena. It is not winning that necessarily drives them, even though competitive athletes hate to lose, but the enjoyment they get out of the challenge competition brings to them. Knowing this simple fact about the competitive athlete can bring great motivational rewards in training when applying this concept to practice sessions. This is true whether it is done by the coach or the athlete themselves.


In my forthcoming book Becoming a True Champion, I discuss the idea that many athletes tend to go through the motions during their training and practice sessions, even some very good ones. I have seen on many occasions athletes, working on a skill, technique, or performing a drill, go blindly through the movements with limited or minimal focus. Quite a few don’t even realize that they are doing this and, when asked, insist they are putting in 100% effort. Now I do have to admit that when a drill, technique, or skill is brand new to the athlete, they do tend to bring more focus to bear on the task; however, as they begin to feel more accomplished (which is still much below their performance potential), their focus tends to wane. Their effort might still seem high to them. They run, jump, dive, and cut hard, or do whatever (certainly putting forth sweat and effort) in attempt to get the job done, but the focus is just not where it needs to be for real and marked improvement to take place.

What I would suggest, whether from the coach or the athlete themselves, is to find a way to bring that competitive aspect into the training/practice gym. In fact, I am a firm believer that the more practice is like competition, the better. Why? Because the competitive athlete will automatically be vested in whatever it is they are doing; thus, bringing their level of focus to a much higher level than without this aspect. In addition, I would always have a “consequence” and/or “reward” system set up for any competition that occurred in training. I did this myself as an athlete, and amounted to nothing more than not allowing myself to leave practice until I had accomplished the drill/skill that I was working on to my satisfaction. I also did this as a coach, not allowing my athletes to leave until they had accomplished their training goals for the day. In a sense, I was teaching them how to compete against themselves, turning their competitive spirit into a motivational device for training improvement.

Whether a team or as an individual, this strategy can be used to motivate competitive athletes to much higher levels of focus during practice. All you have to do is:


· decide on a number of completions/repetitions
· establish a set criteria of performance that must be achieved and/or maintained during those completions/repetitions
· set up some type of consequence/reward system
· and let the athletes compete against each other in groups or teams (or better yet, against themselves having to better their previous high score each time they work that particular skill, technique, or part of the game)

The increase in performance and athletic potential through the use of competitive training sessions as explained above can be immeasurable.


Note: Division of team members into groups for competition needs to be of equal ability, giving all a chance to succeed based on effort and focus.