Is a loss always just a loss? Not necessarily 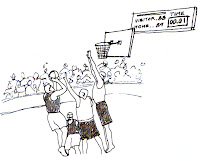 Normally I try to keep my articles and blog posts specific to athletes as a whole and shy away from making them directly personal. However, I recently had the opportunity, and pleasure, of witnessing an example of the true caring discussed in my last blog article Four Attributes That Lead To Athletic Greatness. This vivid example occurred at the culmination of a volleyball match between the University of Louisville, the team my daughter plays for, and highly-ranked Purdue University during the first round of the NCAA tournament. Louisville lost in a hotly-contested 5-game match where lead exchanges occurred throughout. Yet, after watching the match unfold, in addition to seeing the personal and team growth and development the coaching staff promoted and encouraged during the season, I was left with a question, “was this loss really a loss or a beginning?” Oh yes, the scoreboard did read 16 – 14 Purdue at the end of the 5th and deciding game, giving the Boilermakers the go-ahead win into the second round, but the end of the story, hmmm – I am not so sure that will be the case here. From my perspective, I do believe that this particular “loss” may truly represent something much more than an end. That is if I am reading correctly what I saw written on the faces and in the eyes of the Louisville girls after the game as they re-entered the gym from their post-game locker room meeting.

You know, you can see a lot in the eyes of an athlete; it is there hidden behind the tears, that is, if you look deep enough, and as I looked through the tears of our girls, I saw something. Something there behind those tears, an emotional discomfort indicative of that deep-seated caring I have discussed before, the kind of discomfort that could very well speak much louder than that final score on the board. Much louder. Yes, the kind of discomfort that creates the necessary direction and a central focus needed to be successful at anything. For it is through this emotional discomfort, this pain of what could – or maybe even what should have been, that pride and passion are born, where priorities and high expectations are set, and where decisions are made that set you and a team on a path, a course, that seeks athletic achievement and athletic fulfillment. The kind of athletic achievement and fulfillment that not only becomes self-satisfying but gives back to the University for whom you represent, the teammates who helped you build this opportunity and who have since moved on, the fans who support you, and the little ones who come to watch you play with a spark in their eye that says one day they want to be like you. It is here, within moments like these, that the true meaning behind athletic endeavor becomes crystal clear.

When a loss causes emotional discomfort, because of a deep-seated sense of caring, it ignites a true sense of passion, pride and purpose. It is at this exact moment that that loss is transformed into a springboard from which foundations for success are built and one’s dreams turn into achievable goals. Why? Because that is the nature of a Champion.