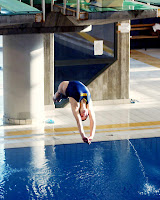 There is some debate on whether perfection is a concept that athletes should strive for. If you Google striving for sports perfection, you will certainly find a variety of information detailing both sides of this issue. Much of this information centers on whether the attitude toward perfection is of the maladaptive or adaptive variety, the latter being preferred. After reading through several of these articles, and relating it to my own personal experience with this concept, I find that a person’s own belief system and how they themselves view the idea of striving for athletic perfection makes all the difference.


On one side you have those who think that working toward a concept of flawlessness can be self-defeating and will ultimately lead to feelings of failure and inadequacy because perfection is something that is supposedly unattainable. Then there are others who believe that working toward perfection in performance is how an athlete challenges themselves to be “the best they can be” and starts to discover what their true potential is. Two completely opposing beliefs centered on the exact same concept.

As with many things in life, it is actually the perspective you take that determines the effect. If your attitude centers on perfection as an objective you must attain and not doing so, in your mind, is indicative of failure then the idea of this concept being self-defeating and developing into feelings of inadequacy, or “failing,” seems much more plausible. However, if you view perfection as a level of attainment you are always working toward or striving for and your own self-worth as an athlete (or person) is not measured by whether you actually achieve it or not then the latter description in the above paragraph would seem more logical.

As a competitive athlete in my last year of high school, and on into college, I consistently practiced with the idea of perfecting skills. Many phases of my training had some aspect of this concept. In fact, I would designate a specific number of repetitions of a skill (or skills) that had to meet a certain criteria (my current standard of perfection) before I allowed myself to end practice. These, what I later called, mini-goals had to be met on a daily basis, and I was not very flexible with regard to them. However, just like any athlete, I had bad days too. And it was on those days that I grew the most. Sometimes I had to lower my expectation of perfection or lower the number of perfect reps I had to accomplish for that one day just to make it through my training. However, I never perceived days like this as failing or viewed myself as a failure. I just made minor mental adjustments that allowed me to accept what I got out of that day’s practice. In actuality, I drew great pride from being able to persevere and discipline myself enough to make it through a day like this (something positive). And what I found most interesting was that, more often than not, the next day’s practice was always better and I seemed to have a more marked level of improvement.

In essence, for me, striving toward perfection was something I perceived as a level to always work toward and not a measurement of my own self-worth. This, coupled with the full understanding that absolute perfection would never be achieved, and that there would always be areas or aspects that could be improved, is what allowed continued progress toward my athletic potential.

So, it is the perspective one takes regarding this concept of striving for perfection that determines its effects (whether positive or negative), and not necessarily working toward this ideal that decides the outcome.