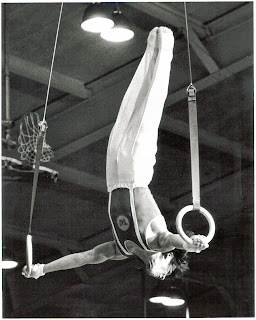 Often I hear team sport athletes talk about how difficult it is to perform their skill set in competition on a consistent basis. I have frequently witnessed many of them (team sport athletes, and even entire teams) ride a wave of inconsistency playing well one night and completely opposite the next.

It is during this up and down performance rollercoaster that I find myself asking questions like, What if?, How come?, Why is that so? and Is there a better way? As a former athlete, coach, and teacher, it is simply part of my nature to ask such questions.

So what is it that seems to make it difficult for many team sport athletes to achieve the consistency that eludes them? In order to try and answer that question it might be best to take a look at sports where consistency is king.

In sports like figure skating, gymnastics, and diving, athletes must perform flawlessly if they are ever to succeed. One mistake, just one, can spell the difference between first and who knows what place. They do not have the luxury of saying, “Ok I will get the next one” as do many other athletes. When they falter, they must hope others falter or they’re done, out of contention.

As I contemplate asking how they deal with this, because the best of these athletes are exceptionally consistent in their performance over time, I reflect on the fact that these are athletes that do not have an opponent firing an object at them nor are they competing directly against their opponents.

Hmm, that is true, however, they do have the added pressure of that “one mistake and you lose” type of situation to deal with and no second chances. That sure is a lot of pressure, really tough pressure I would think.

In addition, there are athletes who do have objects fired at them and do compete directly against an opponent, and the best ones are still able to consistently perform well under pressure. Tennis is a game like that with 140 mph serves coming at you and you have to return them over a net. Tough to do that is for sure, and there are athletes in that sport that are known to be deadly at returning serve. In fact, they are so good it strikes fear in many a server’s mind, increasing the errors they make.

So that brings up another thought. All four sports I mentioned above are individual sports and do not really carry a team aspect to them.

Hmm, that is an interesting point. However, that point in and of itself raises a very fascinating question that I believe is at the center of this discussion.

What would happen in a team sport if an athlete playing that sport brought to the table the same perception, attitude, and focus that the individual athlete brought to their table (into practice and competition)? Would there be a change? I mean does it really matter whether the skill set a person is working on is for a team sport or individual sport? Is there really any difference between the effort and focus one needs to train or compete a double or triple axle in skating, a 2 ½ somersault with 2 twists in diving, a return of serve in tennis, a free throw in basketball, or a pass in volleyball.

I mean the skater could easily take off or land on the wrong part of their blade or catch some bad ice causing an error, the diver may have to contend with a stiffer board than what they are used to, the tennis player may incorrectly predict the speed or kick of the ball, the basketball player may not put enough arc on his or her shot, and the volleyball player may not accurately judge the wobble in a floater serve.

So then the real difference centers around the fact that in passing a volleyball, shooting a free throw, or returning a tennis serve – the athlete will likely get another shot at it while the diver and/or skater will not. They could easily be out of the running with one mistake. This is also true in a sport like gymnastics, no second chances.

This makes me wonder if this is the reason for the wavy inconsistent play you see from many a team sport athlete. That because there is likely to be a second chance, focus is much more easily lost. Maybe even training and practice are looked at differently by team sport athletes. Maybe many – most, with the exception of the very consistent, don’t carry the same focus into their training that a successfully consistent individual sports athlete does.

And maybe they don’t carry the same perspective that their successfully consistent individual athlete counterparts do in competition, that every single movement – every single skill – does count and that the better you do each one, the higher your chances of succeeding regardless of what everyone else around you does. That always working toward perfecting your skill set is what will bring to the athlete the consistency they are seeking. This is true for any skill they perform even with the knowledge that absolute perfection is impossible.

So again, what would happen if a team sport athlete brought into their training, practice, and competition the same perception, attitude, and focus that a successfully consistent individual athlete has to bring into theirs? What would happen if the importance of quality of one’s skill set took on the same level of importance that it does for their successfully consistent individual sports counterparts? Would those athletes be able to perform their skill set at a consistently higher level than other team sport athletes that continued on the path that most of them seem to follow?

Case in point, I have seen a volleyball player literally drop a serve receive pass right on top of a setter’s head when the chips were really on the line. Say on championship point where one mistake would have caused an immediate loss. And I have seen it done many times in pressure situations like that. This is not something exclusive to volleyball either. Many of you know of a few athletes in other sports who consistently do the same thing, that when the game is on the line they simply perform better.

It is that same perspective, that same attitude, that same focus that these specific team sport athletes bring to their position in pressure situations, time and time again, that leads to the consistency that the best individual athletes seem to possess and train with on a regular basis. That is what they, the individual athlete, must bring to their table if they are to consistently handle the pressure they are always under when they compete. If they don’t, they are no more consistent than their team sports counterparts who seem to always ride that wave.

So you see, all athletes are much more alike than they are different. They all have an environment they must adapt to, contend with, and try to control. The only real difference between athletes is in the quality of what they are willing to bring to their training and competitive table in order to help them consistently perform at peak levels.

And herein lies the conundrum that so many team athletes are faced with. Do they continue to ride the wave of inconsistent up and down thinking, accepting that that is just the way it is, or are they willing to learn from their successfully consistent individual sports brethren and make a choice to be different and become the difference?

Yes, it is true that just because one team athlete takes on the attitude explained above that their team could still not succeed. But what are the chances of the team succeeding without that change? And what if that change encourages the change in others, then what?

I leave you with that last open ended question.