Process Over Outcome: Has America Forgotten? 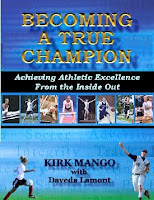 The first half of this post’s title takes direct aim at something I have spent a good deal of time referencing in many of my articles pertaining to youth sports. What I would like to do here is step back from that environment for a moment, taking a look at this idea of process over outcome, and the loss thereof, as it relates to the “big picture” – our society as a whole. Before I go ahead with my rant on this topic, it might be a good idea to define these two terms as they pertain to the relationship I am about to draw between them and what I see as a shift in American ideals.
What I mean when I refer to the term “process” is the actual work and/or effort that one essentially puts into a task. It is demonstrated by a clear and organized path that takes into account what is to be done today, tomorrow, and in the future. One who focuses more on the process takes great care in clarifying for themselves how what they are doing today will build on what they want to do tomorrow. “Winning” today is not as important to one who prioritizes the process as is building toward consistent success down the road. It is more of a long-term approach that lends itself to continued gains and achievement through time rather than immediate gains in the here and now. Making sacrifices now for possible future successes later fits well with the idea of “process” type thinking.

Conversely, the outcome is the end result, the “reward” so to speak. It is the “gains” one has or gets after the work has been completed and/or choices have been made. It is characterized, at least in reference to what I am discussing here, as more of a short-term approach. Concentration and focus is weighted toward ways to achieve that outcome in the shortest and most efficient way possible – this is of utmost importance. “Winning” today is of high priority, even if it may negatively impact the future. The impact on this future that today’s decisions have 2, 5, 10, or 20 years down the road is looked at as something that can be dealt with later, when or if those impacts materialize. It is not of primary concern at this immediate juncture. Making sacrifices now that would limit current gains is not something indicative of outcome-type thinking, rather it centers on accomplishing short-term-type goals.

Now that we have those clarifications and definitions to work with, let’s take a look at how things have changed. Most of you reading this post are either 3rd, 4th, or maybe even 5th generation immigrants, meaning that you, as I (3rd generation), come from descendants who came to the United States to make a new life for themselves. Many did this with little or nothing but the clothes on their back, building their lives and supporting their families from the ground up. They were a hard working lot who focused on the “process” of putting in a full day’s work, and then some, building something from nothing. Their approach exemplified the definition I am using for the term “process” in this article. Sure they were concerned about future outcomes. It was (and is) impossible not to be – it is part of the equation, but their attitudes and work ethic were most certainly weighted toward the idea of process over outcome.

As we move forward through time to today, we see a gradual but definite shift from the focus just described to one where behavior and attitudes become more outcome-centered. Gaining immediate gratification or short-term access to success has become a top priority. Many are willing to seek out shortcuts toward what they want to “achieve” as concentration, focus, and effort move in the direction of the ends over the means, and all too often with little or no consideration of the risk or cost to oneself or to others.

In order to clarify and add credibility to the statements listed above, let me take a moment to list some fairly recent events supporting my conclusions:

a. Auto Manufacturers – whether they want to admit it or not, the American auto industry has placed themselves in a position of possible non-existence due in large part to their inability to see the “big picture.” While their counterparts focused on the longer term process of building high quality automobiles that gave owners better gas mileage and provided an in-road to a more solid future for themselves, our short-term outcome-based automakers concentrated their efforts on gas-guzzling SUV’s and luxury vehicles (something the short-term outcome-based American consumer helped support). In the end, it all boiled down to making money now over making consistent money over time. It is not to say that those types of vehicles should not have been offered, there was and is a limited need; however, it is difficult to argue with the idea that our countries automakers had their eyes on the immediate $$$$$ that could be made. At least much more so than on a “process” that would guarantee future success and longevity.

b. Enron Scandal – a situation where a company’s (and/or executives within that company) greed and focus on making money - the outcome, came before anything else. And at a big cost to many.

c. Other Big Business Scandals – if you Google “scandals in big business” the list that comes up is wide and varied. Most all causes eventually boil down to finding ways to circumvent the “process” in order to quickly get to an “outcome,” or $$$$$.

d. NCLB & Schools – as partially inferred in my last blog Things Your Kids Didn’t Learn in School and the Youth Sports Environment, our schools are heavily focused on the end result. Emphasis is moving away from counting efforts put forth for practice and homework – “process,” and being placed only on test scores, especially standardized test scores – “outcome.”

e. PED & Steroid Scandals – even though major league baseball is currently getting the brunt of publicity regarding their use, I can assure you that these illegal substances are used as a means to gain access to success for too many in professional, Olympic, and elite level sports. The outcome-based focus here – fame, fortune, glitzy lifestyles, winning at all costs, and (false) achievement.

f. U.S. Government – often times uses a “band aid” approach to addressing financial issues borrowing from Peter to pay Paul. How long can we actually borrow from funds saved for other means, and from other countries, to build roads, pay bills, or any number of other things, and not dig a hole so deep that we cannot ever recover. Making things better for the short term without truly considering the long-term risk is central to an outcome-weighted approach, at least as to how I have defined it here.

g. Youth Sports – the emphasis in youth sports today that places winning as the #1 priority and/or the scholarship as the reason for sports participation, both of which lend themselves toward the less rewarding aspects of an outcome-based foundation.


I am sure there are other aspects I am not aware of that many could add to this list; however, the items above help to prove my point inferred in the title of this blog. That we, as a society, may truly have forgotten an important foundational principle; one that was part of an internal strength that Americans and America had at its core.

So even though this blog, and my general focus, centers on youth sports and positively impacting its participants, this issue of placing more emphasis on outcomes rather than the process seems to be symptomatic of a bigger problem affecting our society as a whole.

From my vantage point, when our approach to gaining success and achieving goals becomes so heavily weighted toward the “end result,” or outcome, with little consideration for the consequences of that approach, or process used, then trouble usually follows. Looking at the list I provided certainly helps to justify that conclusion.

Whether in work, sports, or life in general, focusing in on the process with the understanding that the outcome is a byproduct of this process, gives advantages not easily seen from the outside. It is central to the intrinsic value one receives and pride one feels when true and real accomplishment is achieved, creating the type of success that lasts from generation to generation.