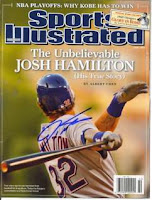 A conversation between myself and my daughter’s fiancé regarding character (or lack thereof) and sports, possible endorsees for my forthcoming book Becoming a True Champion – which certainly has a focus on character and integrity as a foundational principle, and the state of affairs with many elite and professional athletes today, prompted several questions. If an athlete, or any person for that matter, makes a poor character choice, a mistake (i.e. cheating, illicit drug use, etc.) are they destined to live out the rest of their life as an individual known for being short on character and integrity? Is it possible to rebuild the trust lost through a change in direction? If so, does this become a solid and respectable example for others, especially kids, earning back that previous loss of character? Basically, is there any redemption for such an individual?

To answer these questions one must reflect on what having and demonstrating good character and integrity means to them. In reference to this discussion, do they really mean unconditional perfection of choice or is there the possibility of recovery at some point?

I suppose that is part of what makes Josh Hamilton’s story and struggle from drug addiction, including alcohol and crack cocaine, back to prominent major league baseball star (hopefully all clean and sober) so intriguing and so full of hope for those watching from the outside. Touted as the #1 pick and talent in 1999, and held in the highest regard by most scouts, Josh was chosen first in the draft by the Tampa Bay Devil Rays. He had hit the big leagues and was on his way to the Tampa Bay franchise right out of high school, and with a $3.96 million dollar signing bonus. Looked at by many as a once-in-a-generation (maybe lifetime) type player, he was injured in a car accident in 2001 sidelining him from baseball and putting him on injured reserve. With an abundance of free time, and money to go with it, he began hanging with what many might refer to as the wrong crowd quickly succumbing to the pressures existing within such an environment. After failing several drug tests, and many trips to rehab, he was finally suspended from baseball for a year in March of 2004 and again in August of that same year after not showing up for a mandatory drug test during that same month. It was not until sometime in October of 2005 that he hit bottom and started his steady, but difficult, climb back to normalcy, and baseball prominence. (For a more complete version of his story I would recommend Albert Chen’s article The Super Natural at SI.com. It is a lengthy but good read that will provide you with more detail than what I present here, and prepare you to answer the questions I have posed and will pose in this article.)

With Major League Baseball’s recent scandalous past (accusations in Juiced by Jose Conseco, the Mitchell Report, A-Rod scandal, etc.), it certainly would be refreshing to see a player of this caliber (whose fall from grace demonstrates the probability of consequence through poor character choices) change the direction of their life, make their way back to the top and attempt to rebuild the character and integrity lost by making the right choices.

However, there are other perspectives. Some may say that any person with the enormous talent and opportunity that he had/has (and all the money, fame, and fortune that went with it), who makes the choice to hang with a seedy crowd, becoming an addict in the process, and possibly waste away an opportunity most will never see, is not deserving of any sympathy or noble status. That there are other individuals who have dealt with very difficult adversity and/or scaled what looked to be insurmountable barriers, that were not their choice, and become something more through sheer will and determination, all without turning to drugs. Jim Abott (the one-handed major league pitcher) is one example that comes to mind. Even Dustin Carter, the high school wrestler featured in this blog: Video Demonstration of a "True Champion", fits well as an example.

So where does a story like this fit in the big picture of things? Is Josh Hamilton someone we should admire for the courage it takes to face and tackle his own personal demons, something so many others try but fail to do? Does taking the proper steps, making the tough choices, and pulling oneself out of the gutter that drug addiction ultimately brings a person warrant the kind of respect normally reserved for individuals who tackle tough adversity without this burden of choice? If he continues to maintain his ascension to the pinnacle of baseball elitism, should he be placed on a pedestal as a positive example that kids can use as a guiding light? Or is he just another highly touted talent, a spoiled prodigy who had everything, and flushed it all away, at least, it seems, momentarily?

Josh Hamilton, someone to be idolized, victimized, villianized, or something entirely different? You decide. All comments welcome.